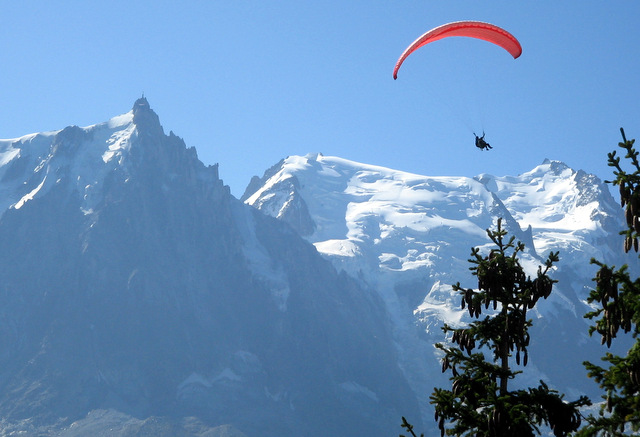 A paraglider soars above Chamonix

Paragliding above Chamonix in front of the Mont Blanc Massif. A pilot soars above the Chamonix Valley, after taking off from Planpraz, where this photo was taken. The Aiguille du Midi towers over the town on the left of the picture.  Mont Blanc is the mountain on the right. The true majesty of Mont Blanc cannot be comprehended, even from up here in the mountains opposite. Move further away to at least as far as Megéve, then the summit can be seen as the tallest in the Mont Blanc Massif.

Chamonix is a popular place for paragliding. It has numerous paragliding schools where you can take a tandem flight. If you get the bug, it is possible to progress to obtaining a solo licence after one week’s continuous  tuition. The photo is from August, but as long as the weather conditions are amenable, then it is possible to fly at all times of the year using the the cable cars and Europe’s highest cable car lift to the Aiguille du Midi to gain access to the take off zones.

I’ve decided to call this series of posts #PhotoFlashbacks as I don’t intend to post a ‘Photo of the Day’ everyday. Furthermore, they are not Postcards from anywhere. Unless of course you are one of those people who buy postcards at a place then forget to send them and end up sending them from home.

Getting there:
Chamonix is served by SNCF and FlixBus.